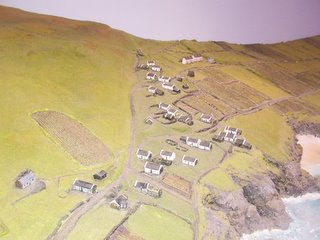 I will begin this entry in my weblog by quoting two very similar quotes from two very disparate sources. The famous Great Blasket writer, Muiris Ó Súilleabháin penned the first quotation that comes to my mind, and it runs: '... mar a deir an seanráiteas, is goirt iad na deora a shileann, ach is goirte ná san na deora ná sileann.' An English translation would run thus: 'Bitter the tears that fall, but more bitter still the tears that fall not.' I think he was returning at the time of penning these lines to the island of his birth as a very young boy, his father having died, to the home of his grandfather. There is a lot of truth in this statement - unexpressed grief will surely wreak havok on the prson by way of psychosomatic illness. What put this quotation in my mind was the hearing of another quotation from a modern psychoanalyst and this one runs thus: "Sorrow that does not end in tears makes other organs cry." I was attending a series of lectures on Psychoanalysis at Trinity College here in my home town, Dublin city, Ireland. Unfortunately, I didn't catch the name of the psychiatrist or psychoanalyst who uttered these profound words, but I was stunned by how close they were to my favourite quote from Muiris Ó Súilleabháin. Muiris penned these words in his famous autobiography, Fiche Bliain ag Fás which was translated widely into other languages. The English version is called Twenty Years a-Growing and is well worth a read. It should not surprise us much that traditional wisdom of ancient civilizations contain much that is wholesome to the soul and the spirit. No wonder Carl Gustave Jung turned to the study of the mythologies and beliefs of the ancients. I also enclose a picture I took recently at Ionad an Bhlascaoid Mhóir - The Blasket Island Interpretive Centre - at Dún Chaoin (Dunquin) in the Dingle Peninsula. The picture simply depicts a to-scale model of the original village on the island. I shall enclose some other pictures related to this area over the next few posts. Until we meet then: beir bua agus beannacht!
Posted by Tim at 10:49 pm No comments: Links to this post

Some Random Thoughts on Meditation 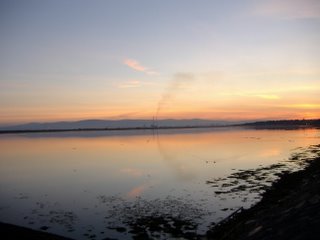 Posted by Tim at 12:12 am No comments: Links to this post

No man is an island 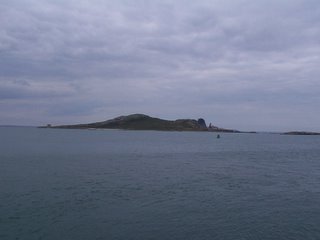 “No man is an island entire of itself…everyone’s death diminishes me…” or words to that effect. The great Anglican divine and Dean of St Paul’s Cathedral London, John Donne (1572-1631) wrote these words in a famous meditation. The actual text is from Meditation number XVII and reads more fully: “No man is an island, entire of itself; every man is a piece of the continent, a part of the main. If a clod be washed away by the sea, Europe is the less, as well as if a promontory were, as well as if a manor of thy friend's or of thine own were: any man's death diminishes me, because I am involved in mankind, and therefore never send to know for whom the bells tolls; it tolls for thee." See http://www.luminarium.org/sevenlit/donne/donnebib.htm for a full index of all his works. To meditate on death is indeed a sobering thing to do. Those, like Donne, just at the beginning of the early modern age, knew death at first hand. Life expectancy then was very short indeed. In many of his poems, as indeed in the poems and writings of other contemporary authors, the reality of death was never really very far away. For all the truth in Donne’s writings, there is yet a dimension of life he has not explored – namely that the death of others can add much to our lives in a mysterious and strange way if only we have the insight to explore that hidden and eclipsed dimension of death. That’s easy, of course, for me to say from the security of our existence under the protective and often shallow crust of modern society of the twenty-first century. Today, when we meditate on the death of those we love we try to see their leaving us as a celebration of all the good in their lives. We can’t fault John Donne for the preoccupations and dark beliefs of his era – he lived in pre-medical times as it were! So the deaths of our loved ones can expand our horizons, can give us strength to live life more fully and make us thank God or whatever “benign” force lies behind this wonderful, if at times, cruel universe. From the deaths of all my loved ones I have learned about the great sacrifices of love – especially from my grandmother, Phoebe St Ledger, who when she married my grandfather Patrick Brophy, gave birth to 12 healthy children and lost three or four, perhaps more. I remember as a young boy praying by her deathbed and touching her ice-cold marble hands. From my Uncle Pat’s death I learned the great value of generosity and the great value of good humour. From the death at a very young age of my Uncle John, I learned the supreme courage and good humour of a man who could face blindness, several amputations and finally death with great acceptance and serenity. Then, there was the death of Uncle Jim 12,000 miles away in New Zealand – from this I learned the value of following your dream wherever it might lead. From the death of my grand-aunt Annie I learned the courage of persistence and resilience. There are so many things we can learn, not just from their deaths, but also most especially from their lives. Most people leave this world as they have lived their lives in it – I think that is essentially true. I could go on listing all the people I know who have died. However, I shan’t bore the reader with such details. Rather I shall finish with a little reflection on the death of my own father, Thomas Francis Quinlan (1913-1993): Thank you Thomas for the gift of my life, for your gentle presence, for providing for us to the best of your ability, for suffering the ills that life meted upon you without complaint, for the courage you showed as you went on your final journey of death, for kissing all good bye with “I love you” on your lips and ours, and for your beautiful last words: “It’s such a lovely day!” The picture I include with this post is one I took three years ago, and it depicts the island called "Ireland's Eye", off Howth Harbour. Beannacht leat a scrbhinn.
Posted by Tim at 1:01 am No comments: Links to this post

This poem explores our personal unconscious. 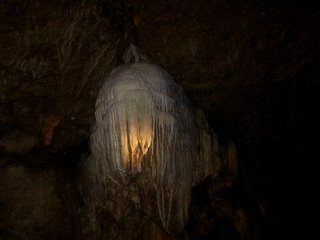 Phantoms, monsters, ghosts,
Jesters and clowns –
All of them –
That crowd our dreams,
Bearers of some deep truth
Lurking in unexplored corners.

Here, we dwell in fine appointed
Houses and apartments
With the world at our fingertips,
Yet there are those deep down
Cobweb places of the heart and soul
Where hairy spiders crawl
And bind their prey

Bit by little bit
And suck their blood away.
Layer upon layer of intricate,
Delicate and oh so finely woven webs –
Embroidery that hides
Multitudes of little sobering truths
Waiting to be known,
Pleading for our courage to go where

The bony skeleton rattles chalk-stiff limbs
And drops a loosened tooth to
The dust of long forgotten cares,
Beyond the dung heaps of our burnt-out passions
To a cool still corner of a lonely cave
Where water drips compassionate drop by drop
And carves a crystal sculpture from the soul
Like an ancient stalactite
Reaching from a roof of stone. [I enclose a picture I took in Dunmore Cave in County Kilkenny, Ireland. It's a picture of stalactites - not a brilliant picture as the camera I had at the time was not too good!]
Posted by Tim at 11:59 pm No comments: Links to this post