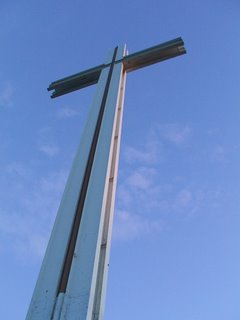 Jagged edges,
Splintered glass,
Twisted metal,
Shape of shapelessness –
And yet he looks
For patterns all the time
To give him comfort.

Where words blow
Like withered leaves
Down long forgotten
Overgrown tracks –
And yet, he knows
The trees are strangely
Sprouting buds.
It must be spring
At last…

He is a priest without a flock,
Without a religion,
Without a God,
Left with the ancient ritual of tears
To water his starved soul.
Outside the daffodils are blooming -
It is the poet’s cruellest month –
April of the frosts and showers
And muck and mess
And mix of death-in-life
And life-in-death –
It must be spring
At last!

The picture I have inserted above is of what we Dubliners call "The Pope's Cross", Phoenix Park, Dublin. I took this photo three years ago.
Posted by Tim at 11:01 pm No comments:

Thinking Outside the Box 5 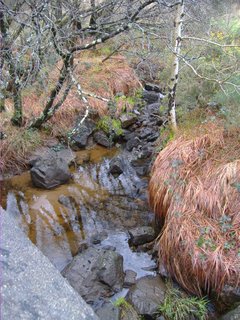 Thinking Outside the Box 5 Perspective: Now that I’m on a roll I shall press ahead with these few thoughts of a philosophical nature. As you will see I shall try to make them as practical and as pragmatic and as related to life as I possibly can. This entry I have entitled “perspective” as I both think and feel that it is a wonderful word capturing an equally wonderful concept. The dictionary definition tells us that perspective derives from the Latin verb perspicere which means to “inspect” or “view” something, the past participle of which would be “perspectus” i.e., “viewed” or “inspected”. It crops up then in the science of optics dating way back to Middle English, because of its relationship to vision. Perspective then means a view or vista, a mental view or outlook. For example, take the following sentence: “It is useful occasionally to look at the past to gain a perspective on the present” (Fabian Linden). Enough then for the dictionary definition. Now let’s look briefly at its use in art. If you look along a straight road or a railway track, the parallel sides of the road appear to meet at a point in the distance. This point is called the vanishing point and has been used to add realism to art since the 1400's in Florence, Italy. Also distant figures appear smaller but have the same shape and proportions as they would close up. In geometry, we would say that these figures are similar. Leonardo da Vinci is a good example of the chief exponent of perspective in art in so far as he was able to create the illusion of space and distance on a flat surface such as a canvas or wall. He saw the painting as an “open window” through which the artist sees the painted world. Hence he achieved a more realistic representation of life. There are millions of problems in the world and every single person has his/her own share of them. However, on many occasions we magnify our own issues or problems out of proportion and loose perspective on them. We often need to stand back and view them from a further distance to gain some sense of “realism” or reality. A lecturer we had at college years ago used two images with respect of this. Sometimes we stick our noses so closely to the painting that we cannot see the actual picture. Another excellent image he used was that of the magnifying glass. Some of us get things so much out of proportion that we actually magnify our problem out of all proportion. So, my friend, we must get things in perspective, move back from “obsessing” over our particular issue and try and gain some sort of realistic perspective. This, of course, is more easily said than done. However, there are many people out there willing to help like friends and other professionals, perhaps recommended by friends. What we need is openness to life, an admission that we do not have all the answers, that we, too, are struggling with life. In short, we must have a healthy willingness to learn. John Henry, Cardinal Newman, the Victorian Catholic theologian used to say that oftentimes “we must mount upon an eminence” (not himself, if you’ll excuse the rude pun), that is a hill in modern English, to get a proper view of the countryside around us. The photograph I have posted centre top is one I took recently at Delphi from a little bridge. There is some lesson somewhere there on perspective if I only knew it
Posted by Tim at 2:11 pm No comments:

Thinking Outside the Box 4

Thinking Outside the Box 4 Presuppositions and Prejudices We all have our own presuppositions, without doubt, on many issues. For most of us these are no mere unquestioned presuppositions. They are, rather, simple and bitter prejudices. From my last number of posts any interested reader will see that I have been exploring the ideas of the possibility of objectivity in thinking, the possibility of what we might term “broadmindedness” or the importance of taking a questioning stand with regard to these same thoughts. I have been arguing for a radical questioning of our own viewpoints, for a radical and philosophical approach to any of our presuppositions on any issues we may feel strongly about. Further, I should like to argue that we must attempt to question, and hopefully tackle our own deep-seated prejudices. Is this possible at all I wonder? Well, a true philosopher would say that it is. I suppose any committed Christian, Hindu, Buddhist or Muslim might say the same, not to mention a humanist of theist, atheist or agnostic hues. Jung, along with Freud before him and many psychotherapists since, have argued that the making of the unconscious conscious is the primary aim of all good analysis or therapy. The same can be said of our unconscious presuppositions and prejudices – if they are unconscious for us (in other words if we are unthinking sheep who follow empty, possibly hateful, slogans) - we must bring them to consciousness, acknowledge them and tackle them, and hopefully uproot them. Prejudices have absolutely nothing to do with intelligence. Let’s take an example of one very hateful and intelligent human being. For my purposes here I will take Enoch Powell as an example. John Enoch Powell, MBE (June 16, 1912 – February 8, 1998) was a right-wing British politician and Conservative Party MP between 1950 and February 1974, and an Ulster Unionist MP between October 1974 and 1987. Controversial throughout his career, his tenure in senior office was brief; however, his skills as a polemicist and orator gained significant public support for his controversial views on issues such as immigration into Great Britain. On this last issue he was a downright racist. (Being an excellent classical scholar was no antidote to this bitter racism) He made a very famous or infamous speech (actually on the anniversary of Hitler’s birthday, of which he later denied being aware), dubbed immediately his “Rivers of Blood” speech by the media, where he quoted that the floods of non-national immigrants into Britain would result in a blood bath. He drew his imagery from Virgil’s Aeneid. As I have already pointed out, Powell was a wonderful classical scholar. This speech was delivered on April 20th, 1968 in Birmingham, England and indeed he alluded to the contemporary Civil Rights movement in the USA during it. Here is a brief quotation from that infamously hateful speech. It sticks in my throat to quote it, but the point I wish to illustrate here is how hate can be so pleasantly camouflaged with rather scholarly words: “Here is the means of showing that the immigrant communities can organise to consolidate their members, to agitate and campaign against their fellow citizens, and to overawe and dominate the rest with the legal weapons which the ignorant and the ill-informed have provided. As I look ahead, I am filled with foreboding. Like the Roman, I seem to see ‘the River Tiber foaming with much blood’. That tragic and intractable phenomenon which we watch with horror on the other side of the Atlantic but which there is interwoven with the history and existence of the States itself, is coming upon us here by our own volition and our own neglect. Indeed, it has all but come. In numerical terms, it will be of American proportions long before the end of the century. Only resolute and urgent action will avert it even now. Whether there will be the public will to demand and obtain that action, I do not know. All I know is that to see, and not to speak, would be the great betrayal.” In summary, I wish to point out that we should never assume that scholars are without prejudices and indeed sheer hate; that reasons can be advanced for every evil under the sun; that persons of supreme intellect, who may achieve great academic heights in any one discipline, can be sadly lacking in the very basics of ethics and morality and empathy for their fellow human beings; that every scholar worth their salt should question radically their presuppositions and prejudices. One could argue that those so called “scholars” who do not do so are uneducated in the true sense of the term by not being open to being wrong; by not questioning their own presuppositions; by accepting the beauty of surface rhetoric rather than diving deep for the depth of real truth(s). The small image I have inserted at the top centre of this post is one of French Sculptor Auguste Rodin's (1840-1917) famous pieces called "Le Penseur" ("The Thinker"). It was originally entitled "The Poet" after Dante. It's re-titling was obviously inspired as this sculpture shows our desire for knowledge and how we must exert ourselves in thinking issues through. It reminds us that real knowledge and wisdom are hard won, and that thinking is an energy consuming act
Posted by Tim at 1:17 am No comments: