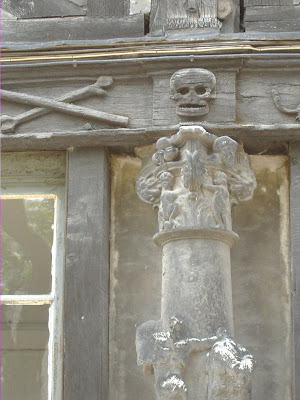 The Sound of Our Own Voice

There are certainly those amongst us who like the sound of their own voice. Can a worse fate be conceived than being forced to sit beside the local or even out-of-town intellectual at a party or soirée or serata or some other nicely named occasion for celebration? Probably not. He or she loves the cleverness of their speech, the lightness of their words and the aptness of their choice of phrase as these same words trip from their tongue. I have been dipping into several books of late by such intellectual types. Now I am not going to dismiss these books in any cavalier sense as I am learning much from them and actually quite enjoy the examples and humour used in their debating their chosen issues. I refer to several authors here and their noteworthy though provocative and often insensitive books or rather styles. However, that these books are sincere and well argued is, of course, beyond question. I will review these books in a later post when I have fully read and digested their contents. To review them without such pondering and genuine evaluation of their contents would be more than cavalier – it would be dismissive and intellectually superficial and high handed in the extreme.

The books I refer to are The God Delusion by Richard Dawkins, God is Not Great: The Case Against Religion by Christopher Hitchens and lastly Six Impossible Things Before Breakfast by Lewis Wolpert. These authors are all atheistic, if not downright anti-theistic in their arguments. In short all three authors set out to disprove the believer’s viewpoint as illogical and incredible and this same believer as a very credulous, gullible and superstitious type in the extreme. All three books are well worth reading and mulling over and digesting. I have read roughly one third ways through each and will review them in the pages of this blog later. (I have always had this habit of reading three, four or five books simultaneously much to the annoyance of some of my friends. Are their any readers out there with this same propensity?) All I want to do here is to make some preliminary comments.

All three gentlemen are very well educated and rate as top intellectuals, with two being professors and the other, Mr Hitchens, being counted among the top 100 intellectuals in the world. However, let us go back to that armchair intellectual we all know who loves the sound of his or her voice. I have included both sexes here for the sake of equality, but from my experience these armchair types are mostly men. They simply delight in hearing their own voice and especially in winning the debate or in scoring points of “one-up-man-ship”. They seem to be very sure of their positions. Not for them the philosophical dictum of Socrates who advocated first the declaration of one’s own ignorance before going further on in one’s debate. Not for them either the questioning of their own suppositions and axioms. They start out from certain a priori positions which for them are simple incontrovertible. All good philosophers know that we should at least take a good look at our own presuppositions and declare certain things as axioms, and then even say why these axioms are so self-evidently clear. At least Hitchens has the good taste to criticize Dawkins for his snobbish elitism by abrogating to himself and others of high intelligence (which obviously all atheists, they seem to argue, really are) the term “Brights.” Hitchens, at least concedes that believers can be intelligent, too! Well done, Mr Hitchens! Obviously Dawkins would term the three of them as “Brights.” Presumable the rest of us are the less intellectual and certainly the believers, in Dawkins’ language, would be “Dullards.” Who is wearing the dunce’s hat? All those billions of deluded folk of all the various religions in the world presumably! Such a position is surely intellectually untenable and extremely dismissive of others, if not possibly “racist” in some sense. (“racist” is not the most precise word here – maybe bigoted would be a better term).

Also all three could do with reading Straw Dogs, an altogether more revolutionary book than any one of the three alone or even these three tomes taken together. Its author, Professor John Gray, outlines his reasoning very clearly and cuts away all the mist from the bog as it were. He clearly shows that even modern science, the clear heir of Enlightenment Reasoning is in itself a type of Religion proposing a Heaven of its own, namely Infinite Progress. It's just that in one view (Religion) salvation is Heaven and in the other view (Science/Atheism) salvation is infinitive progress or passing on healthy genes. Indeed, I feel, Gray is nearer to the truth, he cuts away all the obfuscating growth of weeds to reveal quite a bear garden of reality which both Religion and Science really have not seen at all. I will review this book also somewhat later in these pages. Once again, I feel that I need to do a lot of digesting to get my own views clear. I might add here that there are hundreds of blogs which have reviewed all of the above books. These blogs are worth perusing. Obviously all four authors have hit on a nerve somewhere.

At this stage in my life I hate being preached at whether by evangelical or proselytizing Christians/Believers or equally evangelical or proselytizing Atheists/Unbelievers. The Truth (singular) is, or perhaps more correctly Truths (plural) are, considerably more complex. In short, I feel and think that Shakespeare got it right in the words of Hamlet to Horatio: “There are more things in heaven and earth than are dreamt of in your philosophy, Horatio.” For the moment, to sustain the Shakespearean allusion, the rest must be silence, at least for some few days.

The neologism Bright does not and never has referred to intelligence.

From day one, the word Bright has referred to the Enlightenment, a time when reason and science offered a hope for humanity to move toward a better world. Never have the Brights claimed superior intelligence to supers. “Bright” refers to a worldview, not to the intelligence of individuals who hold that worldview.

The antonym of bright is not dim. The contrast is brights and supers (Daniel Dennett's suggestion).

The Brights' Net is neither an atheist or an anti-religious organization. It is a civil action group, working to create a level playing field for all worldviews, both naturalistic and religious.

The Brights' Net is quite willing to cooperate with religious groups on topics of common interest.

Please be wary when others speak for the Brights. Our website is the definitive source of information.

Thank you, Paul, for this information. I must immediately declare my ignorance up until you corrected me. Also, I referred to Hitchens's comments on Brights and took his understanding of same at face value without checkin g to see if he had checked his facts. Hence my repeating his unsubstantiated view is also misleading. I will indeed check your site. Once again many thanks.