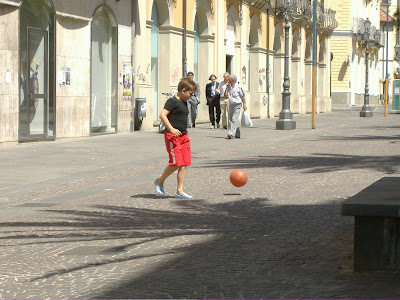 When I feel I’m becoming even the slightest bit depressed or downcast in anyway I find myself lifted up by the smallest acts of human kindness. As I was returning from Paris some few days ago, a little boy of perhaps about 10 years sat between me (I was seated at the window as is my wont when I travel by plane) and a young French man. The little boy took many minutes to settle himself as his parents were scattered here and there on the aircraft as they boarded last. Eventually when he had got himself settled he was profuse in his thanks to the young French man whom he had to disturb quite a few times in his settling down. Le Français and I exchanged knowing smiles at the boy’s innocence and friendliness. Later in the flight he offered both of us some water from his bottle. I thought to myself what a lovely human being and how mannerly for a little boy. I assumed when I saw the parents who were somewhat older adults that he must be the last of a longer line of siblings – in so far as the young boy was quite used to being with adults. Anyway I find such little acts of kindness both disarming and uplifting.

I have mentioned before in these pages that I love the popular writings of Richard P. Feynman the famous American Nobel Laureate in Physics. (Obviously I could not possibly understand any of his technical writings, not being very competent in physics!) However, I have some three books by him – all in the area of popular science and biography (his collected letters). The sheer humanity of Richard P Feynman shines through continually. I return often to my own heavily annotated copy of his letters to cheer and lift me up. A letter Richard P. wrote to a former Ph. D. student of his at Cal Tech, one Koichi Mano is worth studying in depth on the curriculum of any Pedagogy course. I’ll quote the final paragraph which more than captures Feynman’s sheer humanity and the tenor of the whole letter:

“You say you are a nameless man. You are not to your wife and to your child. You will not long remain so to your immediate colleagues if you can answer their simple questions when they come to your office. You are not nameless to me. Do not remain nameless to yourself – it is too sad a way to be. Know your place in the world and evaluate yourself fairly, not in terms of the naïve ideals of your own youth, nor in terms of what you erroneously imagine your teacher’s ideals are.” (Don’t You Have Time To Think? Penguin, 2005, p. 201).

In another letter to a friend, Arnold Phillips, who had written to congratulate him on his award of the Nobel Prize for Physics, he gives this wonderful piece of advice to him on his son’s academic results: “Do not be too mad at Mike for his C in Physics. I got a C in English. Maybe I would never have received a prize in Physics if I had been better in English.” (ibid., p. 185)

I could go on and on with such examples from the letters of Richard P. Feynman. However, the length of this piece and the time constraints pressing must call a halt to my gallop as it were. I will finish with a simple matter of good manners and good service which I and my friend’s wife, Isa, were recipients of in a restaurant in Dun Laoghaire last Friday. For the first time in many months, if not years, I found myself noticing the absolute manners, good care and pride in his job shown by a young English waiter. I simply had to thank him for such excellent, sincere, honest, careful and indeed caring service. The young man obviously loved his job and sought to do his very best by treating his customers well. Anyway, needless to say, we tipped him as well as we could - which is beside the point. The really sad thing I feel is that we are now becoming astounded when we witness normal decency and pure honest-to-goodness humanity! This surely is the sad point about life today, is it not?

Above I have uploaded a picture I took of two boys playing football on a perdestrian street in Nicastro, Calabria, July 2007.
Posted by Tim at 2:16 pm