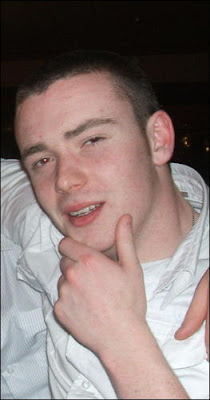 Words can only bring us so far. In the end they fail. In these times of failure images comfort us. In these times of failure ritual lifts us from the depths of our grief and puts us standing together on more solid ground. I write these paltry words from somewhere deep down in the caverns of my soul. I write them in memory of a young man – a wonderful human being – whom it was my privilege to teach. His name is Seán Nolan. He did not deserve to die at so young an age. His family did not deserve to have him so brutally torn from their embrace. His friends did not deserve to have been left without their young colleague just on the threshold of their adulthood.

I have four wonderful memories or images in my mind of young Seán. They will always console and comfort me and put me standing on the solid ground of real human solidarity. The first is of my asking the sixth year graduating class for a volunteer to carry the candle for the service of light at the beginning of the Graduation Mass – Seán volunteered when I asked him after all the others had refused. He was a strong boy; macho enough to do such a non-macho act as carry a red bowl carrying a big white candle encircled with the real petals of red roses. I can see the twinkle in his eye as he said he would.

My next image is of Seán at the Graduation Mass asking me nervously when and how he was to carry this candle. I took the bowl with lit candle in my hands and raised it and carried it, and said, “It’s easy Seán, this is all you have to do, and walk really slowly!” Like a scared little boy he then asked me where he would sit. I think he sat beside his friend David Hutchinson for support.

Another image is of sitting down beside Seán to help him (at his request) to fill in an application form for a PLC course in Sports Management in Coláiste Dhúlaigh. He asked me how to spell a few words. He filled in his form very neatly and carefully.

The final image I owe to Sinéad Coffey who reminded me that Seán had once told the two of us a dream he had had about being on board a ship. There are many other details which are unclear in my mind about this particular dream, but I remember vividly the fact that there was a rather angry monkey on board ship. Seán was asking us to interpret his dream.

These are all memories which I will treasure in my heart. Carl Gustave Jung, my favourite psychiatrist and psychotherapist, talks about synchronicity and how things form a special significant pattern in our lives. Some people call these occurrences mere coincidences. Over the next few posts I’ll write a little about the synchronicity associated with Seán’s untimely death.

Seán has left us with marvellous memories. May his death lie lightly on the shoulders of his beloved family. A big and close family like the Nolans will shoulder this horrendously heavy weight of grief with dignity and nobility. May they gain solace from each other and from friends. May they see the smile of their lost son, grandson and brother in every gesture of support offered over the coming days.