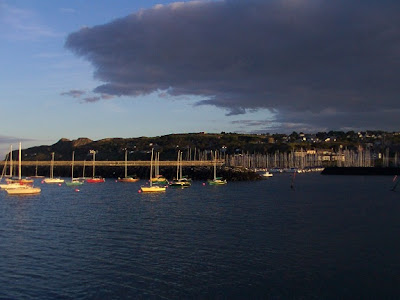 There I was in the most relaxed of moods late Saturday evening last walking the pier at Howth Harbour. It was about 9.30 p.m. and the unseasonable early October temperature of some 14 or 15 degrees centigrade made walking to the lighthouse all the more pleasurable. A calmer and more peaceful evening could not have been conjured up by a magician. The myriad lights of the now not so little village were bathing themselves in calm waters and almost seemed to wink with pleasure at the walker. I often walk Howth pier late in the evenings as I find the experience conducive to a meditative nature that resides somewhere deep within my psyche.

The Big Dipper or the Plough was just a little above me and very close to the horizon as is its wont at this time of the year in the Northern Hemisphere. If you know where there sun sets (West-ish!) and look a little to the right and up a bit then you will be easily able to discern this pattern of stars – it was simply crystal clear last evening. All of its seven stars are quite bright which makes it very easy to find. The astronomers tell us that contrary to our everyday contention the Plough is in fact not a constellation at all but rather part of a much larger group which is a constellation called Ursa Major or the Great Bear. Last evening it seemed as if this marvellous ladle was going to pour a sweet and calm drink for me from the harbour. This, of course, is poetry brought on my essentially romantic nature. Perish the thought in actuality – I’m sure I’d be poisoned.

The night being clear and calm, the sky was like black velvet studded with twinkling diamonds. A family of herons could be heard occasionally calling to one another in their prolonged squawk across the harbour. All around me seemed to proclaim a peace of soul and a silence of spirit that I needed after a long, tiring and loud week dealing with adolescents. Why are young adults so full of noise anyway? It’s probably the stage of life they are at or is it? Friedrich Nietzsche came to my mind. I have always loved his aphorisms which make me really think. I thought of his saying about how nature has absolutely no emotions or feelings – it’s simply that we the observers impute our emotions to it. All you romantics out there forget your stupid dreamy ideas and listen to Friedrich as he tells us that nature is in fact unsympathetic and very much indifferent to our moods. Ruskin can forget about his famous coinage of “pathetic fallacy” which he used to comment upon works of Art

Had I a camera with me I should have chanced taking a photo in an effort to capture the peaceful beauty of the night. That reminds me I need to purchase a more sophisticated camera if I wish to take such photographs as the whole scene before me would come out as nothing short of blobs of light against a black background with my current camera. Anyway, the sight on that calm evening sums up for me what the field of aesthetics is – it is that which makes something beautiful, sublime, ugly, disgusting, fun, cute, silly, entertaining, pretentious, discordant, harmonious, boring, tawdry, superficial, humorous, or tragic or profound. The scene was such that really I should attempt to write a meditation to capture it. As I walked back to my car last Saturday evening around 10.30 p.m. I looked across the harbour to the blue neon lights of the Aqua Restaurant and Bar and recalled Jim Teeling’s recent retirement party. From that restaurant one can view the lights of the trawlers crawling home from an evening of fishing the not so bountiful and not so unpolluted seas. The aesthetics of the view belies both the painful effort of the fishermen and the murkier pollution behind the surface imprression. However, we need such moments of beauty to lift our souls from the “foul rag-and-bone shop of the heart.” It seems there is a time for everything under the stars – for birth, for growing, for retiring, for meditating, for philosophy, for laughing and for crying, and indeed for dying. Everything has its place in the overall aesthetic.

Unfortunately I haven't a picture from last Saturday evening, but the above photo I tool four years ago of Howth Harbour will have to suffice.
Posted by Tim at 11:10 pm No comments: 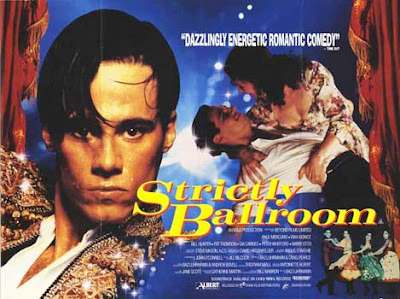 The thoughts in this post have been provoked by viewing the very interesting film Strictly Ballroom with our fourth and fifth year students at the IFI in Eustace Street last Wednesday morning. Firstly let me say a little about rhythm in itself. It is interesting to do a little etymological digging. The Greek “ruthmos” means either “flow” (Classical Greek) or “style” (Modern Greek). I have adverted to both these terms and the concepts they both denote and connote in previous posts. When we read a rather good article or poem we are wont to say that it had an excellent flow, that is, there were no abrupt stops or starts in it. We were carried on by the flow of the article or poem as if we were being transported by a boat caught in its stream. The other term is that of “style” and I have quoted often Buffon’s famous definition thereof: “Le style c’est l’homme meme” – “Style is the man himself.” Obviously we read “person” for “man” today – Buffon was writing some 200 years ago.

To literally find one’s own rhythm or style or flow is to find what is very natural to us. I think, therefore, that rhythm is a marvellous metaphor for a fundamental congruence with the self, for a certain paramount and fundamental ease with the self. Perhaps only people very much at ease with themselves make the best dancers. I don’t know how true this contention is, but I’d imagine it would be worth studying. I have found that as I am getting older and as I’m getting more accepting and relaxed with my inner self that I’m becoming a far better dancer. Maybe this is only wishful thinking. I’m open to any comments from all you dancers out there in the blogosphere.

Rhythm is likely the most fundamental aspect of music, because percussion instruments were likely in use long before stringed instruments. Tribal groups dancing to music made only with percussion instruments is an ancient human practice, which reportedly continues today. I have long been fascinated by the rhythms of tribal and ethnic music from various diverse peoples and lands around our world. Many scholars and musicologists advert to the fact that rhythm recalls how we walk and the heartbeat we heard in the womb. This seems very plausible and most likely indeed. In meditation the rhythm of the human breath and also that of the heart are used quite purposefully.

Strictly Ballroom is a comedy and a “send up” of ballroom dancing. It was originally a play written by Baz Luhrman and Andrew Bovell which was first staged in its country of origin, Australia, in 1984. The film version was directed and produced by Baz with the help of Craig Pearse and dates from 1992. The film stars Paul Mercurio as Scott Hastings and Tara Morice as Fran. Scott is a ballroom dancer comes from a family with a history of ballroom dancing and has been training since childhood. He has become very proficient but he encounters considerable resistance when he tries to dance his own steps in preference to the more traditional ballroom moves. Scott's steps are not strictly ballroom. His dance partner leaves him because of this unorthodox approach to dancing. However, he eventually finds a new dancing partner, and love, with the plain and ordinary dancing student Fran, who unbelievably comes from a traditional Spanish family rooted in traditional Spanish dancing.

For me the film is about being true to one’s self, to one’s innate rhythms and hence to the very truth of one’s own being. Scott like his father before him sought to be inventive and creative by inventing new steps. He, surprisingly, never knew his father had been a dancer and a partner to his mother. His father is presented as a rather “cracked” individual lost in his own private world – he is downtrodden and exploited by his wife who seeks success for her wonderful dancer son. In short she has sold her soul to the devil of success and glory to the detriment of her soul and her real identity, while the father is severely alienated from his real self and is driven into a solipsist world of make-believe.

At the Pan-Pacific Grand Prix, Scott and Fran are disqualified, but dance anyway, and practically bring down the house dancing the Paso Doble, which they have learned from Fran's father and grandmother. In the end, it is not revealed whether Scott and Fran win or lose, as in the story, that is not an important factor. What is important is that they have been true to their very own individual goals and potential. They have been true to their very own unique rhythms and have not sold their souls to the staid rhythms of success. The music in the film is superb as is the dancing. This is a feel good film, and I especially loved the scene where Fran’s father and grandmother teach them the Paso Doble with the grandma beating out its rhythm on Scott’s chest. No wonder that some experts insist thatrhythm recalls how we walk and the heartbeat we heard in the womb. Get the DVD and feast your eyes on the wonderful dancers and especially your ears on marvellous music.
Posted by Tim at 12:38 am No comments: