The Elizabethan Era in Film 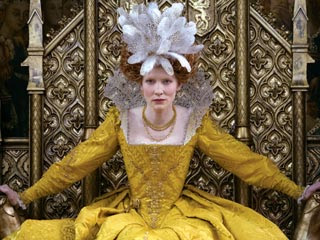 Elizabeth the First: The Virgin Queen

Who doesn’t like going to the cinema? Such an outing is always a great pastime for all, and it engages at least three of the five senses – visual, aural and indeed oral. Needless to say, I refer solely to the popcorn and other such refreshments with respect to this last quoted sense. The other evening I accompanied a friend to see Cate Blanchett play a reprise role as Elizabeth I in the film Elizabeth: The Golden Years. The first film was, needless to say, called simply Elizabeth and it was made in 1998 when Cate, an Aussie by birth, was a mere lass of 30. The tag line for this first film succinctly ran: “Declared illegitimate aged 3. Tried for treason aged 21. Crowned Queen aged 25.”

Elizabeth the First was always a captivating and interesting monarch - renowned for her strength of character and her remaining a virgin (how far we can be sure of this I just don’t know!) The plot of the first movie is full of palace intrigues, attempted assassinations and executions. The movie starts with England divided by faith, Protestant against Catholic. The queen, Mary Tudor has no heir and her Catholic supporters fear the succession of her half-sister Elizabeth, a Protestant. They convince the queen to have Elizabeth arrested and put in the Tower of London, but the queen hesitates and eventually refuses to sign her death warrant. However, Mary Tudor dies and the throne does pass on to her Protestant half-sister Elizabeth. She is also under pressure to marry and produce an heir, but her lover Lord Robert Dudley is not considered suitable. Elizabeth has many suitors but she eventually rejects them all, and, aided by Sir Francis Walsingham, she manages to kill all her enemies and ascends the throne as the "Virgin Queen".

The Director of both these films is Shekhar Kapur. In the second film, the story continues 15 years on from the prequel, "Elizabeth", and opens with the 'Virgin Queen' exploring her relationship with adventurer Sir Walter Raleigh. The film is sumptuously produced and manages to capture the Elizabethan age with consummate skill – from costumes to cathedrals to castles to Elizabethan-age ships to the proceedings of the royal court we are introduced to a vivid and realistic presentation. It’s almost as if we were transported back in time. Then, there are the usual vignettes – Sir Walter Raleigh’s throwing down his cloak so that her Majesty could cross a small puddle without wetting her delicate feet and, my own favourite scene, the one where Sir Walter brings back the “spud” or potato from the New World for the Queen’s delectation. The Golden Age tells the thrilling tale of an era - the story of one strong woman’s crusade to control love, crush enemies and secure her position as a beloved icon of the Western World. Elizabeth 1 was the prototype for the original Iron Lady before Ms Margaret Thatcher was to be called by that soubriquet. In the words of Carl Jung we have two strong “animus women” in these two ladies. Cate Blanchette manages to bring this strength across in her wonderful portrayal of Elizabeth. All through she is a “tour de force” and manages to express considerable wrath when she finds out that one of her ladies in waiting has secretly married Sir Walter Raleigh and is, in fact, carrying his child. This is a wonderful scene where Elizabeth loses all control of her senses and appears as a bully and spoiled bitch – as indeed, I presume all Queens of the period were.

The politics and religious wars of the era are also well portrayed. Philip the II of Spain is presented as a rather pathetic fellow, going around walking in an almost caricatured way with little steps, mouthing invective about Protestants at every possible opportunity. He wants at all costs to restore England to Catholicism by putting a Catholic on her throne. However, here he looks like a bumbling idiot or court clown rather than a King. The fight between Elizabeth’s navy and that of the Armada which Philip had put together to conquer England is fairly well portrayed. The battle scenes are good, though not brilliant. Anyway, my poor knowledge of history has always led me to believe that it was the stormy weather which put an end to the considerable threat of the Armada.

Roman Catholicism is presented as the ultimate evil and, in this version of history; the hosts of Catholics martyred under Elizabeth are all traitors and conspirators. “Every Catholic in England is a potential assassin,” Elizabeth’s advisors helpfully remind her in an early scene. Well, then, every Catholic in England is a potential political prisoner too. I note that the reviewer, Stephen D. Greydanus, in The National Catholic Register, criticizes the film for its “orgy of anti-Catholicism” which he finds revolting and sees the film as presenting “a lurid sort of Christopher Hitchens vision of history.” Whatever about this truth in this criticism, I feel that critics like Mr. Greydanus who expect films to be historically correct are lacking in any real dramatic and entertainment sense of cinema. 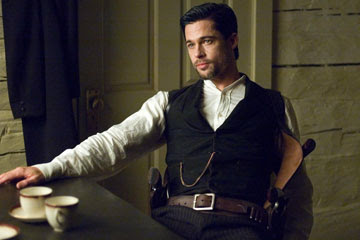 I am writing this post from Paris. It is Irish weather here - it is pouring rain. Yesterday (Sunday) I went to the cowboy film called L'Assassinat de Jesse James par le lâche Robert Ford subtitled in French, but happily undubbed, with my good friends Mat and Isa. I'm not sure of its title in English, but it's the film starring Ben Affleck's younger and far more artistically talented brother Casey. A review I read here succinctly captured this wonderful movie for me:

At one stage in this wonderful, if a trifle too long, film, Jesse(Brad Pitt) asks a comrade if he had ever bothered counting the stars. I forget what was the exact reply, but it was along the lines that he had never bothered because such an occupation would have been a singularly useless one. Talking of stars, I am always reminded of Sean O'Casey's Captain Boyle's rhetorical question to his equally lazy and sycophantic side-kick Joxer: "What is the stars, Joxer, what is the stars?" or words to that effect. The very expanse of the night sky is a wonder to behold. I am equally reminded of Samuel Taylor Coleridge's remark, having been taken many for a stroll by his father to view the mystery of the night sky, that it was by such experiences that his mind had become as he so aptly put it "habituated to the vast."

Apparently, the actual number of stars in the night sky is around 6000, but remember that about 50% are hidden below the horizon at any given time. Katherine Becker of Creighton University outlines a marvellously simple method for making this estimation of the average number of stars, a simple method that could be employed by any teacher of Junior Maths, Science or Geography. See the following site http://www.reachoutmichigan.org/ for an in-depth explanation of this fairly simple procedure.

Anyway, speaking of stars, out of a possible five I would give this film four. Probably, it could do with a tighter editing, but the cinematography and narrator's script are so good that one's attention is held at all times. Also the music is brilliant. Whether you are a Western buff or not, this is a film well worth seeing. The facial expressions of both Casey Affleck and Brad Pitt are superb and carry a depth of meaning that only good actors can manage to express.