The Lightness of Living versus the Heaviness of Having 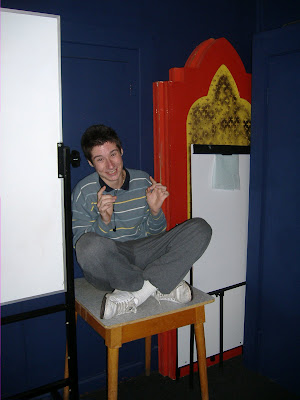 The above title is unapologetically Buddhist in tone and alluringly alliterative.  I have always loved alliteration ever since my erstwhile English teacher Mr Bartholomew Doyle, M.A. appraised us of its use.  This is one of the reasons the Irish language has always enthralled me because of its use, if not over-use, of the same linguistic device.  Be such linguistic digressions of interest or not, I shall leave them there.  As I walked through town this afternoon and having spent both time and money in my favourite bookshop, viz., Hodges Figgis on Dawson Street here in Dublin, I was letting my mind wander and wonder about the existential contrast between Being (Living) and Having.  In my title I have substituted the word "Living" for "Being" for the solely simple reason of its alliterative allure.  I quite admit that "Being" is the more precise word philosophically.  However, existentially, I feel and believe that when living has a lightness about it, it consequently engages Being.

I remember years ago reading the famous psychoanalyst Erich Fromm's book called To Have or to Be (1976, 1979).  I was at Mater Dei at the time and Fromm's distinction had a great impact on me as a young man and has stayed with me since.  In this book he argues that there are two ways of existence that are competing for 'the spirit of mankind' - having and being. The having mode looks to things and material possessions and is based on aggression and greed. The being mode is rooted in love and is concerned with shared experience and productive activity. Part one deals with understanding the difference between having and being;  part two with analysing the fundamental differences between the two modes while part three deals with the new man and the new society.  Fromm was influenced by many strands of study from as diverse fields as the Talmud, rabbinic teaching (many of his ancestors were rabbis, though he himself was not a traditional Jewish believer.  I don't know whether he classed himself as an atheist or not) and sociology, philosophy, history, and, of course Freudian psychoanalysis.  He took the best of insights from all of these sources.  Eclecticism at its best is always to be praised.

When we are in tune with ourselves, deeply in tune with our Inner Self, our Soul, or our Inner Personhood or indeed with our Inner Truth or our Inner Being - call it what you will - it is only then that we can as it were get about the business of living in a more lighter way.  Hence my title - at least one half of it - the Lightness of Living crops up.  I use the word "lightness" obviously with a particular and pointed purpose.  Existentially I have felt both the lightness of living and the heaviness of having.  Have you ever stood back at your place of work and looked at those other "busy bees" around you?  How many of them are literally "weighed down" with one burden or another?  How many people let their job, with all its responsibilities, weigh heavily on their shoulders?  How many never stop complaining of the loads they are carrying?  For how many of us are there not alone work loads but also family loads to carry?  Many of us are burdened quite simply because we let life and others weigh us down.  We let life and others literally dump their own shit on us.  It only takes one other little straw extra to break the camel's back as the saying goes.  How true that saying is, indeed!

Society seems to have more and more expectations of its members - mostly through the lie it promulgates that Having this or that makes us happier.  You will be happier with a bigger and better car; with a winter holiday as well as a summer one; with a better job; with a house in a nicer locality; with more knowledge of this or that; with travelling more; with learning this or that new skill; with earning more money; with having a nicer wardrobe of clothes; with dining in fashionable restaurants; with hanging out with the right people.  However, we need to ask the hard questions of these myths of success as indeed, they too, are myths, modern ones!  Will you be happier with all these things?  The more we own the much more we want to own.  Having insists on having more and more and more.  The more we have quite obviously the more we have to worry about.  The more we have the more weight we literally have on our shoulders.

And so we become burdened and overburdened!  We often begin to stagger under the weight.  Eventually we will begin to crack or even to collapse.  Heaviness borne for a long time is more indeed than wearisome.  It is, in short, oppressive and at times murderous.  To throw off the weight of having all that is necessary is to embrace the lightness of living through getting in touch with what it really means to Be, to get in touch with the Inner Self and its many synonyms that I have mentioned in a paragraph above.

To be that is the real question which modern humankind must embrace if it is to survive well - both physically and mentally fit.  To be means to walk on Mother Earth, if I may be permitted a rather New Age metaphor, with a lightness of being that has thrown off many of the heavy burdens with which having wishes to tie us down.  To be means to be free, to carry one's friends and one's burdens (here I'm alluding to our existential sufferings rather than to any materialistic acquisitions bought dearly with success) in one's heart rather than on one's shoulders.  What's needed is a change of attitude, a change of direction, a change of heart and a change of mind.  Because of all the lies we tell ourselves through those magical and mythic concepts and indeed all those really marvellous material objects which our human-made societies and civilizations provide us with on a daily basis we find it so hard to say no to the more of Having and Yes to the more of Being!

One of my past pupils, Darragh Errity, illustrates the lightness of being at Dalgan Park in November 2006
Posted by Tim at 9:49 pm No comments: Links to this post

Big Questions and a little Gibran 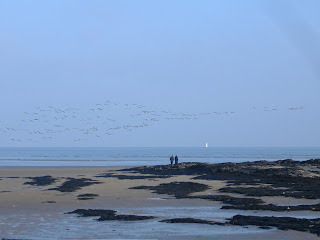 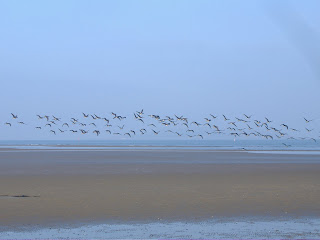 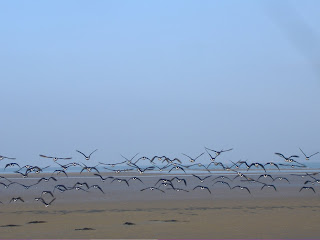 Yesterday I walked with Camus as a spiritual guide while today I walked with Khalil Gibran in his place.  Geographically I have spanned the very expanse or width of the Mediterranean Sea, or "Mare Nostrum" as the Romans called this beautiful sea.  In a definite sense Camus and Gibran occupy opposite poles as regards philosophy and spirituality - Gibran was a believer and a Christian while Camus was a nonbeliever and a hardened absurdist who proclaimed somewhat enigmatically: "I do not believe in God, but I'm not an atheist."  Yet I find both men's writings rewarding and uplifting.  Geographically they lie at opposite ends of the central sea of the world and intellectually and spiritually they also inhabit different world views.  Be that as it may, they are both wonderfully clear and gifted writers - Camus appealing to the philosopher in me who is adept at drawing logical conclusions and Gibran appeals to the Romantic and Mystic in me whose heart melts at this author's passionate insights into life.

Camus was born in Mondovi, Algeria in 1913, the same year as my own father.  Like myself he was born into a working class family - his father Lucien had perished at the Battle of the Marne in 1914.  Now pan across to the western side of the Mediterranean Sea and let your eye descend upon Lebanon, poor brutally bruised and long suffering Lebanon.  There, in a small town called Bsharri Khalil Gibran was born in 1883.  Gibran died in 1931, aged 48, in New York City, U.S.A. He is the third best-selling poet in history after Shakespeare and Lao Tse.  Camus, as I have stated in the preceding post, won the Nobel Prize for Literature in 1957.  Our two men are both literary greats - no mean achievement at all.

What has brought Gibran to my mind today is his beautiful quotation on friendship which I feel is equal to Camus' brilliant quotation on the same theme.  (See the last post on this blog for the quotation).  Gibran also lived to be just about the same age as Camus - Gibran died at 48 while Camus exited this  life at 46 years.  I treasure this particular quotation as it is the handwritten dedication inside a book my friend Mathew Staunton game me. The quotation comes from Gibran's best-known work is The Prophet, a book composed of 26 poetic essays. During the 1960s, The Prophet became especially popular with the American counterculture and New Age movements. The Prophet remains famous to this day, having been translated into more than 20 languages.  It recounts the answers a religious leader or prophet gives before he leaves a particular country.  Here a youth has asked the spiritual master what friendship means.  Here is how the prophet answers:

And let there be no purpose in friendship save the deepening of the spirit...And let the best be for your friend.  If he must know the ebb of your tide, let him know its flood also.  For what is your friend that you should seek him with hours to kill? Seek him always with hours to live.  For it is his to fill your need, but not your emptiness.

For once I had my digital camera with me. I sneaked up quietly and managed to get three wonderful pictures of our wonderful winter guests, the Brent Geese on Malahide strand today!
Posted by Tim at 8:00 pm No comments: Links to this post