The Quest for Father 6 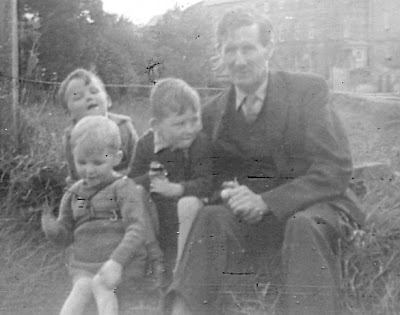 Review of And When Did You Last See Your Father?

Chance looms large in our lives.  Years ago I believed in providence or some divine plan beyond human ken.  Some years later I was not too sure - I had entered my agnostic phase.  Now, I'm still not too sure, but I subscribe to a Jungian take on life - that is a belief in a synchronicity - a pattern in life which more than likely I myself read into life's experiences to make it meaningful for me, to give me purpose, to give me hope and to gift me with not a little comfort.

Deep within me is a yearning for this life I live to make sense, to have a pattern, to take a shape.  That I am a mere chance being amidst billions of other chance beings on this huge anthill we call earth - which itself is insignificant in size when mapped against our own galaxy never mind the universe - is frighteningly pointless to say the least.  A philosophical turn of mind can lead the sensitive soul on a veritable nose-dive into the bottomless pit of depression if such a philosophical sensibility is not tempered by a good sense of humour which can laugh at life's vagaries.

The task of every writer, it seems to me, is to make some sense out of whatever life means for him or her as depicted in this or that novel, autobiography, biography or poem or play; to give some shape to the multifarious experiences of life; to forge connections between random experiences and events; to impose patterns upon the apparent randomness of our existence; in short to give life form or shape in literary genre.

Blake Morrison's book And When Did You Last See Your Father (Granta Books, 1993) pulls no punches.  The character of his father leaps off the page.  The reader can easily visualise this confident, outgoing, extravert and competent physician strutting across the pages or rather the stage that is life.  Indeed, one can see his father Arthur Morrison thereupon - for his particular stage is the town of Skipton, Yorkshire. Doctors have a power in the life of ordinary people that very few other professions have today.  The roles of teachers and priests have long ceased to have public prestige.  The doctor is still seen as having the power to cure some illnesses at least.  The ordinary punter is often quick to place trust in his physician's knowledge and advice.  Hence a doctor can become a "fixer" of life's problems.  Blake's father Arthur saw himself as such a "fixer" of life's problems both big and small.  For him the Ego loomed large.

The book opens with his father's skipping a long queue of cars to gain entrance to a Formula One Race in Cheshire and going in a more expensive gate for which he had not the correct tickets.  The "Doc"  hooks his stethoscope over the mirror on his windscreen to give him more clout - after all doctors may be needed at car races.  Dr Arthur Morrison is painted as a man who likes to do things and do them quickly and now.  He sees no reason why anything he desires might not be achievable or forthcoming.  It's as if his motto were:  "Where there's a will, there's a way."  Blake uses the technique of flashback - every alternate chapter is an episode from the past followed by one from the present and so on until the end of the book.  This is an excellent technique as we have two images firmly before our eyes at all times:- the image of the young strong and determined Doctor as parent striding across the stage of life contrasted with the weakened and bravely dying old decrepit man.  Blake pulls no punches when he describes his father's painful and undignified ending from painful cancer.  Only a son of a doctor could write this in his father's words:

And so this sequence of contrasts brings us face to face with human mortality.  Umberto Eco has said that one of the chief functions of literature is to help us die.  I believe that I have read and heard this from other sources before reading it in one of his books.  I feel Eco hits the nail on the head here indeed.  Morrison's book illustrates this contention admirably.  No faint-hearted reader could possible read it.  I love both Blake's and his parents' ability to cope with life's pain and indignities and to call a spade a spade.

Morrison laments the form of his father's death - a slow piecemeal dying from the indignity and the putrefaction of progressive and terminal cancer.  (My words not Blake's here).  He goes on to state that his father deserved to die as he had lived - an adventurous, outdoor, active, social man who gloried in doing.  Death from a heart attack would have done nicely!  However, life is not neat and tidy.  It is decidedly random and often horribly messy!  Blake does not spare us its randomness nor its messiness. (See ibid., 29)

Above I have uploaded a picture of my own father with my two brothers and me. He has visibly aged after having suffered a bout of polio in which he lost the use of his right arm.
Posted by Tim at 10:55 pm No comments: Links to this post