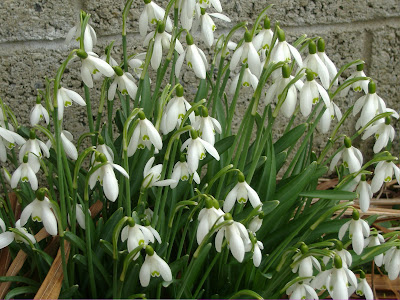 Well, I suppose it is high time I wrote some words in this blog after an absence of one whole month.  I suppose I had virtually exhausted all that I had to say up until the end of December.  Now I am back for more.  So then, what have I been doing with myself these past four weeks?

Well, like most people I have been too busy really – getting used to a new timetable at work.  I now work with Autistic Spectrum Disorder Children, commonly called Children with ASDs.  This is very challenging but rewarding work.  They are low on social skills – indeed some are so very low indeed that communications are always problematic.  I have to be ever more creative when I approach any subject with them.  As well as that I managed to get a cold that has lingered for nearly a month now.  However, this is a small complaint as I did not get a full-blown flu, something I write down to having gotten the anti-flu jab last October.

Outside that I have been attending a course inPsychotherapy since last October in which I’m being trained in a group setting to qualify as a therapist.  It is intense hands-on type of work where the process is always more important than the content.  We have already covered 3 weekends on Humanistic Approaches to Psychotherapy:  Carl Ransom Rogers (PCT), Gestalt Theory (Fritz Perls), Thorne and Mearns and the Focusing Approachof Eugene Gendlin. We also did three weekends on the CBT of Aaron T. Beck and the REBT approach of Albert Ellis as well as the Reality Therapy of William Glasser.  At the moment we have just begun six week-end sessions on Personal Development and Life-Span Psychology.  Overall, it is an intense but richly rewarding course at PCI College here in Dublin – the degree is taken under the auspices of Middlesex University.

So there are many reasons, then, why I have not posted in these pages for such a long time.  Another reason for my silence here is that I have been writing in Gaelic, in my blog Aisling.  Aisling is the Gaelic for “dream” or “dream of freedom” and is a literary term that describes a particular genre of poetry in Gaelic.  In this genre of poetry, the poet falls asleep and is visited by a beautiful maiden who shortly introduces herself as “Éire”, that is “Ireland” who is always a woman in travail, a woman whose lover has abandoned her or whose lover is dead.  She is often desolate and despondent because she sees no hope of help to liberate her fair land from slavery under the Saxon boot.  Added to that, it has become a widely used name taken by female children not alone in Ireland but around the world.  So Aisling is a visionary dream, a vivid dream of beauty which is somehow enslaved, a vivid dream of beauty awaiting release into freedom.  In short, it is a very beautiful, rich and powerfully significant name.  Hence that blog is all about our Irish identity and about my love of the Irish language which is so much part of me and has been since ever I can remember.  In that blog I tackle all those issues – Irish culture and folklore, Irish identity and Irish language, the history of language and literature, the landscape and seascape and the power of myth and music.  It is a blog with a different angle on life to this one.  You will get a link on the right of this blog to Aisling.  If you speak the Gaelic language you will find my musings on these issues there.

And so we begin a new year.  And so time rolls irreversibly and inexorably  ever onwards and we do not notice our minds getting older at all.  Needless to say we are more than cognizant of the ageing of our bodies, which are ever heir to many illnesses, minor and major.  Our hair greys and whitens, our brows wrinkle and our limbs complain of tiredness and yet we feel psychologically so young.  The New Year also brings with it all those resolutions we make regarding diet and exercise and good intentions with respect to writing and reading more or whatever other personal goals we may have.  Sometimes, indeed, we do manage to achieve some of them.

I do not know exactly what I shall write in these pages over the coming year, but I certainly shall review some books I have and will have read and also some films I have and will have viewed, but always such reviews will be somewhat philosophically linked and psychologically rewarding.  They will be books and films that I have enjoyed greatly, indeed, but also they will be ones that I will have learnt a lot from on a personal level.  I will also write about topics that get my heart racing; topics that hit home as it were; topics essentially that are ethically rooted.

In the four years or so that I have been writing these entries I very seldom made political comments.  The reason is that, while I am, like most of you I imagine, a political animal, I feel that there are so very many political blogs out there that another one added to the masses of such makes little or no difference.

Also I write simply for the love of it.  I write for self-expression mainly.  Then, if someone chances to read what I have written, well then so much the better for me and for them.  However, I am prepared wholly to leave that to chance.  I have always found it singularly difficult to be evangelical in anything that I do.  I am no proselytizer or evangelist for my point of view which is just one among many.  This blog is essentially one I write in an attempt to make sense of the project human life is, if I may be so bold as to use that Sartreian concept.  It is indeed a good one, I think.  We are makers and shapers of our own identity and of our own destiny.  This blog is an attempt to wrestle some shape from the morass of putty that life often is; an attempt to stamp some order on the seeming chaos; and attempt to infer some meaning from the complexities of thought thrown randomly at us both from our own minds and those of others; and attempt to sing a song in the darkness; an attempt to light a candle and not to scorn that same abyss; an attempt to assimilate some wisdom to live life more fully despite what Shakespeare called “those slings and arrows of outrageous fortune.”  If, over the pits in the ancient gladiatorial arenas of the Roman Amphitheatres was written “Abandon hope, all ye who enter here”, the motto of this wee blog is “Take heart, all ye who enter here.  Together we can make the best of everything, no matter how bad, no matter how low, no matter how despondent you may be feeling.  Take heart, tomorrow is a new day!”

Above I have uploaded a picture of the first snowdrops of Spring in my front garden, early February, 2006.
Posted by Tim at 10:08 pm 1 comment: Links to this post