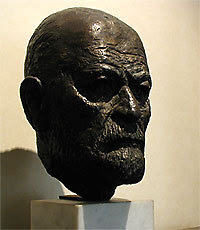 There are times when I rejoice in sheer serendipity – like when I go to a film at random and find I am viewing a gripping, attention-grabbing classic, or when I pick up a book, not quite randomly, but having been attracted by its unusual title, and then cannot put it down until I have read it all in one sitting. Well, this latter experience happened me with the wonderful little book The Death of Sigmund Freud: Fascism, Psychoanalysis and the Rise of Fundamentalism by the American scholar Mark Edmundson. A very long title, I’ll admit, but it sums up fully the substance of the book. I have long been captivated by the megalomaniacal mass murderer Adolf Hitler and, indeed, who is not? After all, is it not unbelievable that millions of people could have been taken in by his venomous and racial invective and had both consciously and unconsciously supported his world-domineering and mass-murdering political policies? Such a riddle has long been a rich area for study and important questioning. Then, to find the rise to power of this megalomaniacal dictator, coupled with the the waning physical powers and death of possibly one of the greatest cultural influences on Western Civilization in the late nineteenth and early twentieth centuries – that is Sigmund Freud - paralleled between the covers of one book had me captivated immediately. Such a book simply said: “Buy Me and Read Me!”

The book is divided into two very apt sections. To use a well worn literary analogy The Death of Sigmund Freud is literally a tale of two cities: the first section is called Vienna and the second London. Here, we immediately have the focal points of this powerful book. The opening is gripping, because it reads like the beginning of a thriller or some novel dealing with international political intrigue. In the opening pages, we find ourselves in the world of Vienna in the year 1909. In this fateful year Adolf Hitler (1889-1945) was twenty, homeless and living in a hostel while Sigmund Freud (1856-1939) was 53 and at the height of his intellectual powers and international fame as a leading psychiatrist and founder of Psychoanalysis. Edmundson presents us with wonderful cameo pictures of both as they stride about Vienna in that year, 1909. Hitler had come to the Austrian capital in the hopes of becoming an artist or indeed an architect. His portfolio of paintings were rejected again and again by the cognoscenti as were all his attempts to become an architect. He ended up homeless and living in a public hostel or shelter where he gave long and boring orations to his fellow inmates, who mostly laughed at this sad little man. Our author recounts how some of the others used tie the tails of his coat to his chair so that when the orator literally “got hot under the collar” from his passionate speeches and had cause to jump up he would pull the chair around the room unwittingly while he still spoke. And this was the sad little man who would become the most powerful dictator the world has ever known.

People who met the man sometimes had doubts about his sanity: none of them imagined that Adolf Hitler…would ever have been of consequence in the world. (Op.cit., 5)

and a little later our author suggests quite illuminatingly, if imaginatively:

If Hitler and Freud passed each other on the street on an afternoon during the cold late autumn of 1909, what would each of them have seen? In Hitler, Freud would have seen a rank denizen of the crowd, a street rat. (Freud was no populist). But he probably would have felt sorry for the unfortunate man as well. For his part, Hitler would have seen a Viennese burgher (he despised the upper middle class) and probably would have recognised Freud as a Jew. Hitler would have drawn back in shame at his threadbare coat and his broken-down shoes. If things were bad enough, he might have extended a hand to beg. Whether Freud gave or not – he could well have; he was generally good-hearted – would have made little difference; the encounter would still have left the young Adolf Hitler seething. (ibid., 8)

Above I have uploaded a picture of a bust of Freud from the Freud Museum, London. This picture is in the public domain. 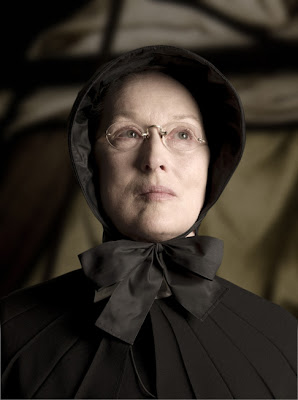 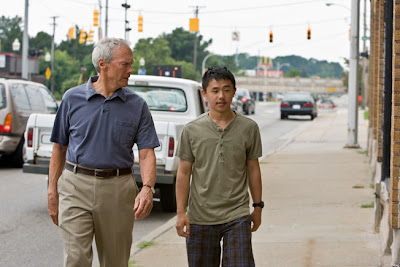 Without a doubt what we all need is a measure of escapism from time to time. That’s why we read blockbusters and go to highly entertaining films. However, we also need those films that make us think; those that make us question our assumptions; those which ask deeper questions; those which provoke our anger or righteous indignation and those which make us weep or cry at humankind’s humanity and inhumanity. The two films I have in mind fall into this second category viz., Doubt and Gran Torino . The first of these films is based on an original play called Doubt: A Parable written by the playwright John Patrick Stanley in 2004. The play was staged on Broadway from November 2004 and went on to close on July 2, 2006, after 525 performances and 25 previews. It was reworked as a film, ably directed by playwright and screenplay writer John Patrick Shanley and was released in the USA on 25 December 2008. The second film was written for the screen by Dave Johannson (story) and Nick Schenk (screenplay) and was released on January 9th in the USA.

Both are deep films with simple but daring plots. Both are conscience-provoking and raise more questions than they answer. Doubt, however, differs greatly from Gran Torino in that it leaves the audience disturbed, doubtful and not a little shocked, while Gran Torino unsettles the viewer for the most part of the film, but does finish with a fairly upbeat, positive and feel-good message.

It has been rightly said that the Russian writers of the late nineteenth and early twentieth century like Tolstoy and Dostoyevsky et al were the thinker’s writers; that novelists like Aldous Huxley and E.M. Forster became their counterparts in modern English literature; that the duty of good literature is to comfort the disturbed and to disturb the comfortable. We need our writers to wake us from our indifferentist slumber; to display a “cutting edge” to use a cliché; to send us about our daily tasks – mundane as they are – a little more enlightened for having read their wonderful words and shared their thoughts and feelings, albeit in at a second remove from their authors. Likewise with good films. They should knock us out of our more comfortable zones.

The film Doubt certainly does that. It makes us suspicious, doubtful and not too sure of our own convictions. I shan’t rehearse here a plot summary of the film, save to say that it recounts the story of the conflict between the two main protagonists viz., Sister Aloysius Beauvier (played wonderfully by the great Meryl Streep) and Father Brendan Flynn (acted by the equally brilliant Philip Seymour Hoffman). In short Sister Aloysius (conservative matriarch, disciplinarian, former window, hard as nails) suspects Fr Flynn (trendy, with-it, friendly, warm, embracing the new approach of Vatican II – the film is set in 1964) of indulging in an abusive sexual relationship with a young black boy. In the film one is carried along by Sr Aloysius’s strong convictions and one becomes very suspicious of Fr Flynn. We are inclined to believe every word from the sister’s mouth and doubt much of what the smooth-talking, and now becoming slightly slimy, Fr. Flynn. In the end the femme formidable gets her man and he moves on. At the closure oif the film Sr Aloysius shows some doubts – perhaps about her vocation, the meaning of life, but not apparently about her unproven suspicions. For a short and quite contemporary-themed film, it is brilliant for the excellence of the acting which makes the whole thing come alive. One can’t help feeling that with lesser actors this film would not live at all, because the theme works upon suspicion only and everything is very doubtful indeed. When we leave the cinema we are convinced instinctively that the old lady is right. One fact which did it for me was the simple device used by the director, namely, having the priest wear long nails, of which we get a close up when he is training the boys in basketball. Indeed, the head nun tells him rather sternly at one point to get them cut. We immediately feel that he is a slimy character. There are some lovely cameo scenes where three or four ancient nuns sup at table with Sr. Aloysius (all very frugal) nicely contrasted with the lavish and gluttonous fare which the male clergy dine on. Altogether a brilliant film which should have won more honours.

Gran Torino is also a wonderful film – Clint Eastwood is at his wonderful best as both actor and director here. Walt Kowalski (Clint Eastwood), a retired Polish American Ford automobile assembly line worker and Korean War veteran, haunted by memories of that conflict, lives with his Labrador Retriever Daisy in a changing Highland Park, Michigan neighbourhood which is dominated by immigrants. Clint is the classic ailing, disgruntled old granddad who feels distinctly unloved by both his sons and his grandchildren who only seem to want to be rid of him, put him in a home for the elderly, get his money and inherit his lovingly restored Gran Torino car, from 1972, if my memory serves me rightly. However, Walt gradually gets to know the family of immigrants who live next door - these are two teenage Hmong neighbours, a shy Thao Vang Lor (Bee Vang) and his feisty sister Sue (Ahney Her) who live with their widowed mother and grandmother. I shan’t bother telling the plot here in case I spoil the film, but the interactions between Walt and his strange neighbours are nothing short of entertaining, funny and moving at one and the same time. I can see all of Clint Eastwood’s past “strong-silent-type cowboy characters” being rolled into one in the very quintessence of Walt Kowalski, Korean War veteran who is haunted by his past. In the end he manages to exorcise his demons in a wonderful ending with a startling twist. A movie well worth seeing for both the acting and for the really good-feeling ending. We need more of such uplifting movies in these rather gray and dark times.

Above I have uploaded stills from both movies: the redoubtable Meryl Streep as the formidable Sr Aloysius and immediately below it a scene from Clint Eastwood's Gran Torino. Both stills are in the public domain and available at this website: Rotten Tomatoes
Posted by Tim at 11:47 pm No comments: