A Poetic Interlude - A Little Bit of Compassion for Self Needed 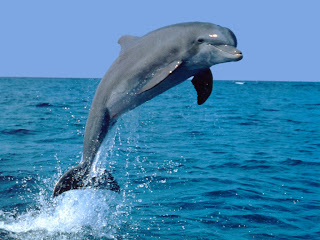 For some reason dolphins are swimming about in the oceans of my mind.  They have many compassionate links for humankind, I believe.  Like all youngsters of the late 1960s and early 1970s I became besotted by the American TV Series named Flipper from Ivan Tors Films in association with Metro-Goldwyn-Mayer Television, which were made from1964 until April 15, 1967.  Flipper, a Bottlenose Dolphin, was the companion animal of Porter Ricks, Chief Warden at fictional Coral Key Park and Marine Preserve in southern Florida, and his two young sons Sandy and Bud.  The show was so popular in America and elsewhere that it was often dubbed the "Aquatic Lassie."

Being a sufferer from endogenous or unipolar depression I have in more recent years marvelled at the studies done on how swimming with dolphins can alleviate mild to moderate depression - see this link here - Dolphins and Health.  In 1996 I went on a two week holiday to Crete where we were fortunate enough to visit the ancient palace ruins at Knossos. I remember seeing one wall in this wonderful palace which had a depiction of a dolphin, a fact that shows that this wonderful acquatic animal had a special place in the ancient Minoan Civilization. 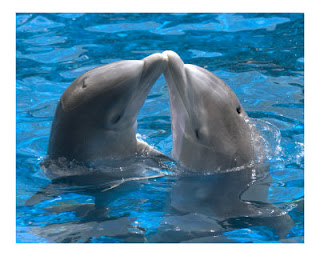 Dolphins also appear in a number of Greek myths, invariably as helpers of humankind, and saved many human beings from drowning. Many ancient official seals and coins show a man or boy riding a dolphin.
In one myth it is said that the god Dionysus - the god of the grape harvest, winemaking and wine, of ritual madness, ecstasy, excess and passion was once captured by Etruscan pirates who mistook him for a wealthy prince they might ransom. After the ship set sail Dionysus invoked his divine powers and caused vines to smother the ship where the mast and sails had been. He then turned the oars into serpents, so terrifying the sailors that they jumped overboard, but he then took pity on them and transformed them into dolphins so that they would spend their lives providing help for those in need.

Moreover, dolphins were the messengers of Poseidon, Greek god of the sea, and sometimes they did errands for him as well.  These beautiful acquatic creatures were also sacred to both the gods Aphrodite and Apollo.

With all this in mind as background I should like to offer here a poetric interlude to my readers in the form of Robert Lowell's (1917-1977) famous poem, called simply "Dolphin."

My Dolphin, you only guide me by surprise,
a captive as Racine, the man of craft,
drawn through his maze of iron composition
by the incomparable wandering voice of Phèdre.
When I was troubled in mind, you made for my body
caught in its hangman's-knot of sinking lines,
the glassy bowing and scraping of my will. . . .
I have sat and listened to too many
words of the collaborating muse,
and plotted perhaps too freely with my life,
not avoiding injury to others,
not avoiding injury to myself--
to ask compassion . . . this book, half fiction,
an eelnet made by man for the eel fighting


my eyes have seen what my hand did.


The above poem appeared in a book of poetry by the same name some few years before the author's death - The Dolphin (1973)  Also, it may be of some interest to note that Lowell suffered from manic depression and was hospitalized many times throughout his adult life for this mental illness.  Although his manic depression was often a great burden (for himself and his family), the subject of that mental illness led to some of his most important poetry, particularly as it manifest itself in his book Life Studies. (1959)

Adrienne Rich called "The Dolphin" book  “one of the most vindictive and mean-spirited acts in the history of poetry.”  The cause of her ascerbic criticism was the apparent fact that Lowell had used direct quotes from his ex-wife Elizabeth Hardwick's private letters to him in some of the poems.
I suppose the dolphin in the above poem represents for Lowell a lot of what my opening background on dolphins indicates and connotes.  This "compassionate" acquatic animal, man's marine friend on a par with his terrestrial canine frined, represents whatever the poet's inner source of inspiration was or is.  The poet's body and mind, or as I am fond of writing in these pages, the poet's Body-Mind or even Mind-Body is literally knotted in pain - mental and bodily pain.  As a sufferer from manic depression he would be all too familiar with such suffering - tortuous and troubled.  And indeed, Lowell's poems are the results of a tortured and troubled mind and soul.  However, that is no major fault.  In fact, it strengthens the poems and allows them to resonate with the troubled core of our human condition - we who wear the badge of our mortality in our very bodies, prone as they are to suffering and pain.

I feel, strangely, that even though the poet feels that somehow he has betrayed, or at least not been loyal enough to his own inner guide, or deeper wisdom or poetic inspiration to ask for compassion, that paradoxically the poem is an exercise in such compassion.  Paradoxically, although he tells his dolphin friend or his dolphin guide that he cannot ask for compassion, his strained and tortured feelings mirrored in the strained and tortured words are, when written and when read, compassionate insofar as they acknowledge the woundedness, the brokenness, the fragmentation of the human condition.  We feel that such a work, once written and read by other compassionate souls will vicariously, by some deeper wisdom, heal similarly paining souls.  This is our hope in our brokenness as mortal beings.  We await the healing caress of the dolphin.
Posted by Tim at 9:35 pm