The soul is about all that matters in a person's life.  It's all about doing the truth according to one's own lights.  It's about being able to sleep with a relatively unperturbed mind. It's about reaching one's full potential as a real, authentic human being.  It's about achieving as far as possible the best level of well-being for oneself and for those close to you.  It's about establishing unique and authentic relationships with both the Self and Others.  It's about becoming who you really are in relationship to oneself, others and indeed the planet.  It's about dealing with the "slings and arrows of outrageous fortune" with a certain equanimity.  It's about being able to deal with our mortality and our contingency as the major axioms of life.  When those two axioms are denied or in any way repressed, then the soul suffers and it will cry out to be acknowledged.  It cries out in the pain and suffering of our illnesses and diseases whether physical, mental or psychosomatic.

Returning to Hillman and Ventura 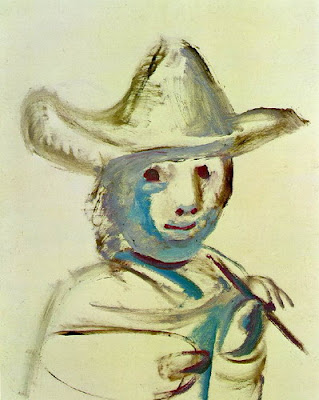 Hillman writes a letter entitled "Life Lived Backwards" to his friend and correspondent Ventura.  Once again we have a paradoxical title which leaves us in no doubt that this archetype psychologist is about to stretch our imagination once again with his thoughts.  When I read any of Hillman's writings I have to work hard because he likes to deepen the questions in search of ever more profound answers.  How do we live life backwards we ask?  Well, our psychologist friend begins with a story as is often his wont.  He tells us about the famous self-portrait Picasso did at the age of 91 years - the year before he died.  He tells Ventura that "this haunting, simple image turned out to be the initiatory experience for my theory of life lived backwards.  Here is the invisible Picasso caught on canvas, a self-portrait of the daimon that inhabited him all his life.  At the end it emerges and shows itself." (Op. cit., p. 61)

In other words, I believe, Hillman is telling us that Picasso has seen through to his "individuated self" (Carl Gustave Jung), his actualized self (Maslow and others), his realized self (Eastern Religions), his daimon (Hillman and other archetype psychologists and mythology), his soul (Religions and spiritualities), his ideal self (Carl Rogers) or real identity.

Hillman tells us that this painting which I have uploaded here is titled Le Jeune Peintre (The Young Painter) where "[t]he white on white gives it (the figure) the feeling of a ghost, of a clown, of an angel, and also of an innocent, though lively and intensely concentrated, observer, whose mercurial alertness has just been caught by the painter." (Ibid., p. 61)

Once again, there is something profound in all of Hillman's writings that appeals very much to me who am a Jungian at heart.  I have already recounted at length his theory of the acorn as it is outlined in his now classic book The Soul's Code.  (See this link here: Footsteps and the following posts) In a nutshell, while we are all very much the result of both nature and nurture, we also have the image of the acorn within, an acorn which possesses all the characteristics of our individual daimon or angel and this acorn or daimon or angel will grow to achieve its full potential in its own particular way.  Each seed or acorn is so unique and so individual that it's a once-off un-repeatable entity which is formed with the help of nature and nurture.  This, indeed, is a good myth to explain the occurrence of both geniuses and demons.  On the one hand the world can throw up a Leonardo Da Vinci as well as a Machiavelli, an Einstein as well as a Hitler.  It is also a myth which explains the development of a "black sheep" as well as the "golden-haired boy."

Like all myths the acorn myth is a powerful one.  It is important to state here once again that myths are not untruths, rather they are a special kind of truth.  They are archetypal stories with equally archetypal themes which have deep meanings and resonances central to our identity as human beings.  In the more profound understanding of myth, all our ways and methods of coming at the Truth or Truths, whichever formulation - singular or plural - of this last term you prefer, are equally valid.

Let me finish this post once again with James Hillman's own words:

It was as if Picasso had been realizing and actualizing and individuating this figure all his life, ever since he was an exceptionally talented, teenage painter - even before Paris and his youth of the blue and rose periods, when he was le jeune peintre.  here was a picture of the acorn painted by the oak.

Picasso's image confirms Henry Corbin's theory that it is not my individuation but the individuation of the angel that is the main task: the materialization with paint, brush, and canvas of Picasso's daimon.  The image also presents Corbin's basic premise about ta'wil, or the art of interpretative reading, how to read life itself: we must "read things back to their origins and principle, their archetype."  (Ibid., p. 62)