Simplicity comes Amongst Us as the Dalai Lama Visits Us! 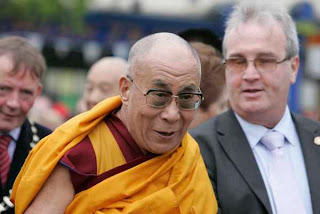 One cannot let the occasion pass without referring to the visit of that wonderful human being, the Dalai Lama, to Ireland over the last several days.  I know what it is like to meet such an enlightened person, having been fortunate enough to present at a talk by another, one Lama Sogyal Rinpoche of the Rigpa Movement some five or so years ago here in Dublin in DCU.  I got to admit I was deeply touched by this speaker's wisdom.

However, I'm not so naive as to believe that such religious leaders or gurus are either infallible or superhuman.  After all, a small number of such gurus have been caught transgressing the law.  See the post entitled Gurus Behaving Badly at the following excellent blog: The Politics of Well-Being.  However, needless to say the Dalai Lama's standing is unbesmirched by such allegation.  The smiling Lama as I like to call him is a truly wonderful beacon in a world where many political and religious leaders have been found so wanting.  The Dalai Lama's message of Peace, Forgiveness and Compassion rings sound and powerful like a bell calling the faithful to meditate on life, to take stock of their mortality and to embrace the liberating message of peace and well-being.

Even to write these words in honour of such a great and wonderful human being is in itself a call to the Still Point of Being; a call to contemplate the contingency of our existence; to meditate upon our sheer mortality; to become compassionate to self and to others and to treat all other sentient beings with compassion and loving kindness.

On last Wednesday, April 13th, two thousand people gathered in Dublin’s Citywest Hotel for the sold-out POSSIBILITIES 2011 civic summit. POSSIBILITIES was organised by three Irish non-profit organisations: Afri (See link AFRI), Children in Crossfire (See linkCIC) and SpunOut.ie (See link SO) and aims to inspire people, young and old, to become vocal and active in transforming our country and our planet for the better. How I should have loved to have been in attendance and to have heard the good man speak, if not to have met him in person!  The soon-to-retire Tibetan leader, His Holiness the 14th Dalai Lama accepted a personal invitation to come to Ireland from his close friend, Derry man Richard Moore.  Richard was blinded by a rubber bullet at the age of 10, and went on to seek out and befriend the British soldier who shot him. Now the Dalai Lama is patron of that organisation Children in Crossfire, a charity founded by Richard.  That charity tries to help children escape from the trap of early childhood poverty in developing countries. 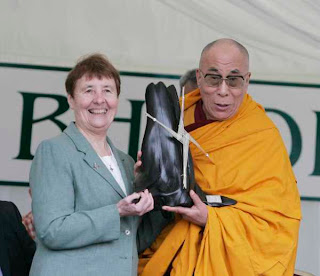 The Dalai Lama spoke on the subject of ‘Universal Responsibility’ in Dublin and how taking action for change is something we all have a duty to do. Following the Possibilities Summit, the Dalai Lama spoke at events in Kildare and Limerick as part of his third visit to the Republic.

Later, on Wednesday in Kildare town, the Brigideen, Sr. Mary Minehan presented the Lama with a Silver St Brigid's Cross mounted on bog oak. In that town the Tibetan Spiritual Leader spoke about spirituality.

Paddy Duffy in his most interesting column on Irish Central website makes the following profound comments on the Dalai Lama's visit:

The fundamental problem with writing about an experience as profound as seeing and hearing the Dalai Lama speak is that the feeling it gives you is very hard to verbalise. Thankfully, the man himself has no such problem verbalising complicated concepts, and I came to realise that how he says what he says is as important as what he says. His is a wisdom that is more powerful stated than assumed, and it was wonderful to hear...  You could feel the 2,000 strong audience felt the same, as speaker after inspirational speaker was awarded rapturous standing ovations that came from their socks. Richard Moore, the founder of Children In Crossfire and the Dalai Lama’s hero, was a special highlight of the day. Blinded at the age of ten by a rubber bullet in his native Derry, Richard is a truly extraordinary example of forgiveness and compassion. Not only has he not let blindness or bitterness consume him, but he’s dedicated his life to helping other children in conflict zones. He even sought out the soldier that shot him, and the two are now friends. It was hard not to well up listening to him speak. (See this link: Across The Pond ) 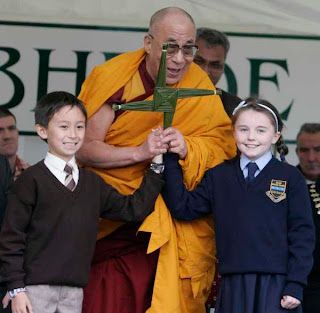 The grief-stricken families of murdered rugby player Shane Geoghegan and Michaela Harte were among an audience of over 3,000 people who listened to the Dalai Lama deliver a stirring message of compassion and forgiveness in the University of Limerick Sports Arena later on Thursday.  Shane Geoghegan’s mother Mary and brother Anthony, as well as Tyrone GAA manager Mickey Harte and John McAreavey, father and husband of Michaela Harte, who was murdered tragically in Mauritius earlier this year, listened intently as the 76 year-old Tibetan spiritual leader spoke for close to an hour about “infinite compassion” in an address called ‘The Power of Forgiveness’, after which he received a standing ovation.

However, oftentimes pictures speak better and more profoundly than mere words.  We are blessed to have had such a marvellous world Spiritual Leader tread on Irish ground.  He is a living image calling us back to the Still Point as I have said above, inviting us to wake up, become alert, to meditate on the essential meaning of life.  Drink deep from the pictures I have here uploaded! 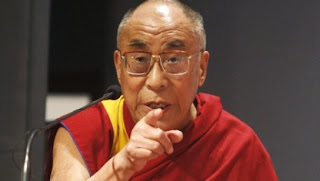