The Web of Life 7 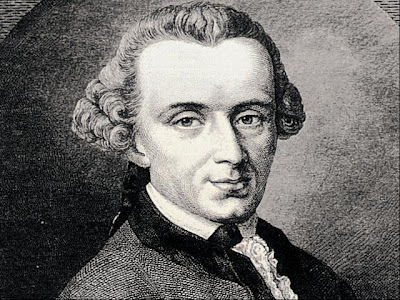 One cannot study modern philosophy without referring to one of the greatest philosophers that ever lived, namely the German Immanuel Kant (1724 –  1804). To give this some context remember that the great English artist, engraver and poet William Blake was born in 1757 and died in 1827.    Kant is seen as a major figure in the history and development of philosophy. German and European thinking progressed much as a result of his efforts, and his influence still inspires philosophical work today. He aimed to resolve disputes between the empirical and rationalist approaches to knowledge. The former asserted that all knowledge comes through experience while the latter maintained that reason and innate ideas were prior. Kant argued that experience is purely subjective without first being processed by pure reason. He also said that using reason without applying it to experience will only lead to theoretical illusions. The free and proper exercise of reason by the individual was both a theme of the Enlightenment, and of Kant's approaches to the various problems of philosophy.

Dr Fritjof Capra reminds us that this same Immanuel Kant taught modern humankind in the wake of the Enlightenment that organisms, in contrast to machines, are self-reproducing and self-organizing wholes.  This philosopher, Capra argues, thereby became the first philosopher to use the term "self-organization"  as applied to organisms and also that he used it in a profoundly modern way.  This profoundly modern way is in keeping with the thought of the likes of Dr James Lovelock who invented the Gaia hypothesis which I have discussed in these pages already. (See Here)

Returning to the Romantic Roots


Romanticism was essentially a return to strong emotion(s) as an authentic source of aesthetic experience in counter-movement to the rationalist tendency espoused and practised by the Enlightenment movement.  It has long been accepted that periods of conservation and conservatism are followed by periods of renewal and liberalism.  Periods of seeming sterility are followed by periods of creativity.  In common parlance people refer to "swings and roundabouts" or "ups and downs" of the progression of history.  Romanticism placed a new emphasis on such emotions as trepidation, horror and terror and awe—especially that which is experienced in confronting the sublimity and indeed wildness and ferocity of untamed nature. Qualities like spontaneity, passion and a return to folk memory, folk art and the "language of the common man" (Wordsworth) were all invoked among other kindred qualities.

The German scholar and poet Johann Wolgang von Goethe spoke passionately about nature, another great Romantic concern as "one great organic whole."  Now this idea of the Earth's being alive is an ancient one indeed.  It can be traced way back to prehistory even, that is, to a time before written records of human activity began.  From the Neolithic through the Bronze Ages, the societies of Old Europe worshipped numerous female deities as incarnations of Mother Earth.  This sensitivity to the "one great organic whole" persisted for many hundreds of years until the severe break inaugurated by the Cartesian image of the world as a machine.  While there were indeed some infatuations with this "one great organic whole" all during the course of history, most modern scientists followed in the footsteps of Descartes in untenanting the world of its great organismic oneness.

Hence, it is in the tradition of Goethe's Romantic understanding of the organic unity of the Earth that we can assuredly say that James Lovelock's more recent Gaia hypothesis finds its home.  Capra maintains that biologists and zoologists managed to stay somewhat more loyal to this more Romantic vision than did their contemporaries from other scientific disciplines over the course of history.  This is not surprising because they were dealing with real living things as opposed to chemicals in a laboratory or to the abstract theories of physicists.

The history of the science of biology is a rich and interesting one indeed, Capra argues, and one can see why.  After all the subject or object of its study is the very nature of life itself.  Vitalism and organicism  were and are movements or beliefs opposed to the reduction of biology to chemistry or physics.  As Dr Capra expresses it:

Both schools maintain that, although the laws of physics and chemistry are applicable to organisms, they are insufficient to fully understand the phenomenon of life.  The behaviour of a living organism as an integrated whole cannot be understood from the study of its parts alone.  As the systems theorists would put it several decades later, the whole is more than the sum of its parts. (The Web of Life, p. 25)

Biologists could literally see the limitations of the reductionist model of science in line with that of Descartes, dramatically so indeed with respect to the problems of cell development and differentiating.  In the very early stages of the development of higher organisms cells double continually in number.  Now since the genetic information is the same in each cell, how then can these cells become different cells like muscle cells, blood cells, bone cells, eye cells, nerve cells, brain cells and so on?  Here we have an instance of where the whole is more than the sum of its parts visibly and demonstrably.  What is this "whole" or this "more"?  That is the question , and a very good one it is indeed.

Vitalists assert that some nonphysical entity. force or field must be added in to the recipe for life, if I may use a metaphor.  In other words the laws of physics and of chemistry are not enough alone to explain or understand life in itself.  Organismic biologists maintain that this additional ingredient is no so much added to the recipe as it were; rather it is an ingredient already immanent in the "organization" or "organizing relations" in life itself.  We will attempt to tease these ideas out in my next post.
Posted by Tim at 3:29 pm