Interlude - Reflections on Innocence: A Novel and a Film

The Terrible Tension of Opposites

I have written many times in these pages about the tension of opposites - they seem to be at the very heart of our existence.  And somewhere along that continuum between those opposite poles thrives life.  The tension between opposites may at times be experienced as terrible or terrifying, but if life is to be embraced in its fullness, this tension has to be lived through.  It is in grappling with this tension that we grow.  When we deny it, we stagnate or wither, or worse still we embrace one or other extremist position, that is one which denies unrealistically the other pole.  Those who do this end up sanctifying certain people, positions, thoughts and feelings while demonising other people, positions, thoughts and feelings.  These are those people who live in a monochrome world where black is black, white is white and where there are no shades of grey in between.  Spare us from these extremes and extremists. 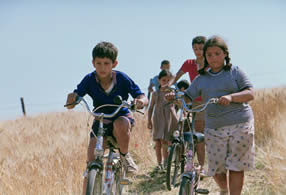 The specific tension of opposites I wish to explore here is that between innocence and experience.  Indeed this tension has been, and still is indeed, at the heart of much creative literature.  The book that immediately comes to my mind here is that wonderful novel Lord of the Flies by William Golding which was one of the novels I read for my Leaving Certificate exams at school here in Ireland in 1976.  It is a wonderfully rich story which treats of this conflict between innocence and experience and the growth of moral evil in our world.  It does not surprise the reader that this wonderful novel by Nobel prize-winning author William Golding was published in 1953, less than ten years after the end of World War II which inflicted such unprecedented suffering on humankind.  At an allegorical level, one can argue that the central theme of this novel is the conflicting impulses that seem to be at the heart of humankind and which seek to establish a secure civilization, that is, on the one hand, the impulse to live by rules, peacefully and in harmony where we protect one another's back as it were, and on the other hand, the impulse to take over and control others, in short, the will to power. Other themes include the tension between  what one might term "groupthink" and individuality, between rational and emotional reactions, and between morality and immorality. How these play out, and how different people feel the influences of these, form a major subtext of Lord of the Flies.  However, to my mind at least, the Innocence versus Experience tension reigns supreme as a holder, as it were, of all these themes..

The boys in Golding's novel were survivors of a plane crash on a remote and idyllic, almost paradisaical island that reminds the reader of  perhaps The Garden of Eden or at least of Robinson Crusoe's island in the Caribbean.  Anyways, this backdrop is the scene against which the struggle between good and evil, care and indifference, love and hate, morality and immorality plays itself out.  At base, the individual, I argue, experiences this struggle as a tension between Innocence and Experience. 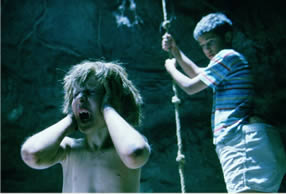 Now these thoughts have been maturing in my mind, even soul if you will, over the last week or so, after I had viewed the wonderful film Io non ho paura (I'm Not Scared) from the Italian director Gabriele Salvatores.  The theme of this beautifully directed and splendidly shot film is once again the struggle between the innocent world of childhood and the not-so-innocent of adulthood; the struggle between good and evil as it is played out in the lives of poor boys and girls as they struggle to grow up in the Mezzogiorno area of Italy in the late 1970s.

I'm Not Scared (Io non ho paura) was made in 2003 and was directed by Gabriele Salvatores. The script was written by Francesa Marciano and Niccolo Ammaniti.  Indeed the film is a screen version of a novel by the second of these script writers, Niccolò Ammaniti's successful 2001 Italian book  Io non ho paura. The story is set during Italy's anni di piombo, a time riddled with terrorism and kidnapping in the 1970s.  Now "anni di piombo" literally means "years of lead" and most likely refers to the huge amount of bullets fired during these years of conflict.  In fact, there was a film of that name - Anni di Piombo - made and screened in 1981.

I'm Not Scared (Io non ho paura) takes place in 1978 in a fictional town called Acqua Traverse in Southern Italy during the hottest summer of that century.  The film centres around a ten-year-old boy named Michele (Giuseppe Cristiano) and a group of his friends who set out on their bicycles each day across the scorched wheat fields of Southern Italy.    This film must be seen on the cinema screen to drink in its wonderful cinematography.  One is immediately drawn into this wonderful land in the sun.  For me the film brought me back to the time I was ten years of age and loved going around with my own friends in the country of youth, in that idyllic paradisaical world before experience taught me that there is indeed evil in the universe. 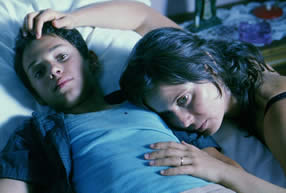 I even remember the games of daring we used to play which were quite similar to those portrayed on the screen.  For many minutes we adults are brought lovingly and gently into the world of our own youth, only to be disturbed by the experience of grosser things in the apparently idyllic landscape.  These grosser things in turn are (i) the bully among the gang of friends, (ii) the spooky call of the raven and the hidden world of the scary creepy crawlies, (iii) the discovery of the zombie-like boy, (iv) the further discovery that daddy is not that wonderful after all.  In fact he is a member of the kidnapping gang, (v) the sharing of a room with the evil gang-leader, and finally (vi) the fact that adults aren't really all that wonderful at all, nor is the world they inhabit.

All in all, we are reminded that growing up is a painful business, that the world of innocence does not and cannot exist in its own purified and rarefied state.  The harsh world of experience must enter in.  That harsh world, indeed, can be coped with and even incorporated into the innocent world if and only if we are courageous, and this film seems to suggest that such an incorporation can take place if we grow morally and rebel against the grosser aspects of the evil in the world and in ourselves.  Michele's father does rebel against his leader by putting the love for his own son first.  Also, at the end of the film the wounded Michele reaches his hand out towards the now freed kidnapped boy, suggesting again this possible incorporation of experience into innocence and some possible positive resolution.  In other words, if we are willing to learn from our mistakes, to change from selfishness to selflessness in reaching out to others then possibly this world will be redeemed.

At the end of Lord of the Flies we read the familiar and oft-quoted lines therefrom, lines which I have committed to memory ever since my first reading this novel in 1974/5: "Ralph wept for the end of innocence, the darkness of man’s heart, and the fall through the air of a true, wise friend called Piggy."

One gets the feeling, having read this wonderful book from the pen of William Golding that evil will win out in men's hearts, but one is left with an equally strong feeling after viewing I Am Not Afraid that innocence can somehow incorporate the lessons of the experience of evil and that somehow love and care can win out.  Golding, having fought in World War II in the British navy, was all too aware of evil and one can consequently forgive him his negative take on humanity.  In like manner, one can also understand Niccolo Ammaniti's positivity having lived "the good life" in more peaceful times.
Posted by Tim at 6:13 pm No comments: Links to this post