The Small Man with the Big Voice - A Tribute to our new Uachtarán - Michael D. Higgins 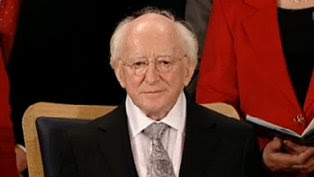 I owe my title above to Miriam Lord from her column in today's Irish Times where she describes our new Uachtarán na hÉireann as "this small, grey-haired man with the big voice."  I must admit that as the campaign for the presidency got under way, I had not a clue for whom I should vote.  Seán Gallagher's practicality, business acumen, positivity and seeming uncontaminated pedigree initially won me over.  Then, thanks to the clever attack of Martin McGuinness on the latter's association with Fianna Fáil which showed him as yet another of that party's "bag men," I knew that there was only one candidate worthy of this prestigious office, namely Michael D. Higgins.  I was one of the more than one million voters to put this small scholarly and visionary socialist into office.  Comhgháirdeachas ó chroí dhuit, a Mhíchíl, Uasail.  Go maire tú an céad! ( literally translates as, "Hearty congratulations, noble Michael! May you live to be 100!")

What impresses this writer about our new president is his passion, his commitment, his sincerity, his congruence (as Carl Rogers would term it) or his sheer authenticity as the existential school of philosophy would have it.  That Michael D Higgins is an authentic and congruent human being is beyond doubt.  As well as having a successful political career as a Labour Party Teachta Dála (Gaelic for Member of Parliament) he has also had a career as a poet, author and broadcaster.  He has contributed widely to political and philosophical journals on many subjects including ideology, the sociology of literature, clientelism in politics, regionalism and the politics of the media.  I have already alluded to his passionate nature. No matter what Michael D. becomes involved in, there are no half-measures. He is perhaps the last of the great orators left in political circles, and a passionate Michael D. speech is still a pleasure and an entertainment to behold. 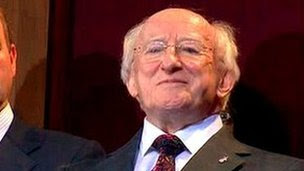 He has also written and presented a television film on Montserrat, entitled The Other Emerald Isle for Channel 4 as well as a fine documentary on the life of Noel Browne, for RTÉ.   Thus far he has published three collections of poetry viz.,  The Betrayal (1990), The Season of Fire (2004) and An Arid Season (2004).  I am currently reading a book of his collected lectures and speeches - Causes for Concern - Irish Politics, Culture and Society (Liberties Press, 2009) which essentially covers these seminal areas of Irish identity.

I recommend anyone with an interest in Ireland of the present and of the future to read the programme for the presidency - clár a uachtaránachta - that he lays forth in his inaugural speech.  However, it is not just the lucidity of his prose that catches one, but rather his passionate condemnation of the Celtic Tiger period of Irish politics and culture that literally grabs one's attention.  This quotation from his speech is worth reproducing here.  One does not have to be an Einstein to realize that he has the Fianna Fáil party and their "bag men" and the bankers and speculators in mind while he was penning these words:

However, in more recent years, we saw the rise of a different kind of individualism – closer to an egotism based on purely material considerations – that tended to value the worth of a person in terms of the accumulation of wealth rather then their fundamental dignity. That was our loss, the source in part, of our present difficulties. Now it is time to turn to an older wisdom that, while respecting material comfort and security as a basic right of all, also recognises that many of the most valuable things in life cannot be measured.

Our successes after all in the eyes of so many in the world have been in the cultural and spiritual areas – in our humanitarian, peace-building and human rights work - in our literature, art, drama and song – and in how that drama and song have helped us cope with adversity, soothed the very pain which they describe so well, and opened the space for new possibilities. (See here ) 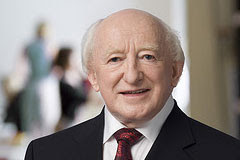 That this man means what he says and says what he means is beyond a shadow of a doubt.  His speech, written in the quiet surroundings of Glenstal Abbey where he went on retreat the previous week-end to his inauguration, speaks compassionately about our "wounded society," "the most vulnerable" in our communities, of the pain of "broken expectations," and that his presidency would be one which would reach out to all those broken by the warped vision of the Celtic Tiger era, though he does not use that disgusting term.  His vision for Ireland is one which is inclusive of all, from the weakest to the strongest, from the youngest to the oldest, from the richest to the poorest, from every minority group that lives within our boundaries as a country.  His vision of Ireland, he tells us, is and must of necessity be a profoundly ethical one, as well as being inclusive.

That Michael D. cherishes the artistic and the cultural in all their various incarnations as well as sports is also undeniable.  That he will be an eloquent and worthy president as also without question. Perhaps there is no better way to finish this post than with some of the introductory words of Taoiseach Enda Kenny's speech at our President's inauguration:

Michael D Higgins is indeed a noble man of quiet virtue who will bring that nobility of heart and mind and spirit to the office of the President; to all his endeavours in the name of Ireland and the Irish people. His authenticity as poet, philosopher, patriot and politician, as a democrat, republican, husband, father will resonate across this country and around the world. (See here )